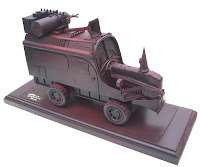 During the 1970's and 80's there were urban legends circulating in mostly small provincial towns in the USA and Canada of white vans being driven by clowns, which were capturing teenagers. These teenagers were always 'the good, kind kids' and would never be heard from ever again. The White Clown Van Panic caused a state of terror in parts of the Midwest to the point were state troopers lay in wait to capture these white vans. Even though none of these stories had any basis in truth.

Turning this idea upside down - here is a van I made. It has one purpose to travel across the Earth collecting the life energy of sociopaths which it uses to power itself.

As sociopaths have no souls the Van creates no pollution. It drives into a town. Collects the life energy of the sociopaths and then leaves town. The community is then free from the misery, distortion and the nonsense sociopath's create. Everyone is happy afterwards.

The Van drives all over the world crossing the oceans by driving along the sea bed until the last sociopath's life energy has been collected. Then the Van will collapse in on itself, until all its sub atomic particles are condensed and packed into the density of Neutron Star. At this point it will fall to the center of the Earth. Following this, there is nothing but happy and uncomplicated communities all over the surface of the planet.
Posted by Thomas Sheridan at 2:52 AM

Wow, you make vans as well, Thomas! But I already knew that your creativity is unlimited. :)

A fantastic van. I have driven irregular vehicles in my days alright but never something like this.

Very cool sculpture. I think you could get some Venture Capital for that invention. It would also make a great movie.

very cool, coincidentally i have a friend currently writing a book based off of a similar idea of a van that takes kids from their communities...i wish there was such a place for sociopaths

Thanks all. Can't agree mre Sean.

Never heard the legend before -- wonder what would happen if Stephen King got hold of it. Very evocative contraption you've created --looks like a cross between a locomotive and a rhino.

Do you think you send the van in the direction of one of my senior bosses? I hate him. He would sure need it; he is a sociopath.